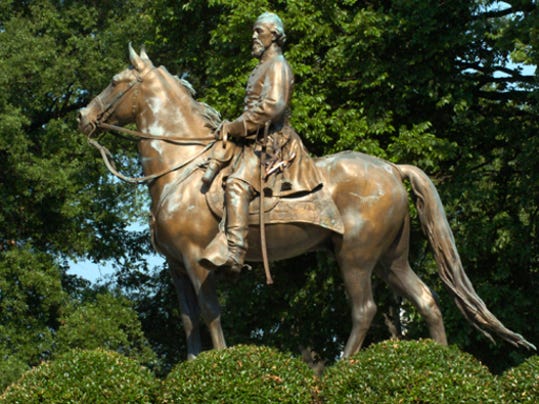 A few years before Nathan Bedford Forrest became the leader of the Ku Klux Klan, and decades before a statue of him was dedicated in Memphis, the Confederate general overlooked Fort Pillow and planned how he would destroy the beacon for escaped slaves.

Numerous assaults eroded the garrison in April 1864. When the commander declared that he would not surrender, Forrest sent waves of rebels to finish off the dwindling Union troops — many of them black. “The sight of negro soldiers,” a Confederate witness said afterward, “stirred the bosoms of our soldiers with courageous madness.” The Mississippi River was blood red for 200 yards, Forrest later said.

In 1905, a statue of Forrest on horseback was dedicated in a Memphis park, 40 miles south of the site of the battle and later massacre.

On Tuesday, nearly 154 years to the day that his troops obliterated the fort, Forrest’s ghost — and his statue — haunted the Tennessee legislature.

The Republican-dominated House voted to remove $250,000 earmarked for the Memphis bicentennial next year after the city engineered a way to remove that statue in December, along with a statue of Confederate president Jefferson Davis. The amendment was adopted in a $37.5 million spending bill still working its way through state chambers for approval.

“This is one of the most vile, racist acts I’ve seen happen in the legislature,” state Rep. Antonio Parkinson (D), who represents Memphis, told The Washington Post on Wednesday. Parkinson is part of the majority-black population of Memphis.

“From Scopes Monkey Trial, to 10 Commandments resolution of ’96, & now to punishment of Memphis for removing statues that honor leaders of the Confederacy, the TN House of Representatives sadly continues to embarrass Tennessee across the nation,” Cohen wrote Wednesday on Twitter.

Parkinson was joined by House Democrats and several Republicans in opposition to what they called a punitive measure after the December statue removals. The city skirted laws meant to block removals of memorials on public grounds by selling two parks containing the statues to a new nonprofit called Memphis Greenspace for $1,000 each.

“They act like Nathan Bedford Forrest is their God,” Parkinson said, referring to proponents of the amendment in the House. “What I see is a vicious, violent individual who made his fortunes out of the human slave trade.”  Read the entire article here.