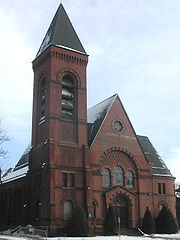 In 1819, a group of African Americans in Hartford grew weary of being assigned seats in the galleries and in the rear of churches and decided to begin worshiping on their own in the conference room of the First Church of Christ, now Center Church, in Hartford . This would become the first black Congregational Church in Connecticut, the third oldest in the nation. The congregation moved its services to a building on State Street in 1820. That same year, the congregation established itself as The African American Religious Society of Hartford and resolved to build a house of worship where all would be welcome and no one would have assigned seating.

In 1826 the congregation purchased property at the corner of Talcott and Market streets, where they built a stone-and-brick church.The church became a key institution in Hartford’s black community and a center for abolitionist and social activity. Noted lecturers including Arnold Buffman, former president of the New England Anti-Slavery Society, and abolitionist Rev. Henry Highland Garner helped establish the church as an anti-slavery meetinghouse.Realizing that members could not prosper without an education, the founders established a district school. For many years this was the only place in Hartford where black children could learn to read and write. Having become a religious and educational beacon, the church changed its name to the First Hartford Colored Congregational Church in 1839.

The church had several pastors in its early years. Among them was Rev. Dr. James W.C. Pennington, who is remembered as an eloquent orator, preacher, and freedom fighter. A fugitive slave, he escaped from Maryland through the Underground Railroad. For years, Pennington feared that he would be dragged back into slavery, until Harriet Beecher Stowe’s brother-in-law, John Hooker, purchased him for $150. Pennington received his freedom papers on June 3, 1851. His Bible remains in the Church’s possession.

In 1860 the church was renamed the Talcott Street Congregational Church. In the years that followed, the church had several pastors. By 1886, the congregation was in search of stability, and Rev. Robert F. Wheeler was named pastor. Under the leadership of Rev. Wheeler, the congregation eventually outgrew the original building. The old single-story church had to be torn down to make room for a new two-story building. At the farewell service in 1906, Rev. Wheeler said, “Although the name of this organization has changed at different times, the property has belonged to the same people and has been used for the same purpose.”

In 1916, the arrival of Rev. Dr. James A. Wright, one of the most distinguished ministers in Hartford, ushered in a vibrant era for the church through two world wars and the beginning of the civil rights movement. The Baltimore native received degrees from Howard University, Andover Theological Seminary, and Harvard University.  He served as pastor at Faith/Talcott Street Church for 43 years. Rev. Wright oversaw the merging of the Talcott Street Congregational Church with Rev. Samuel Gilbeau and the congregation of Mother Bethel Methodist Church on November 19, 1953. The new church, Faith Congregational Church, created a congregation of 500 people and spurred the need for a new church home.

Faith Congregational Church moved in 1954 to the former Windsor Avenue Congregational Church, built in 1871 at 2030 Main Street in Hartford, where it stands today. Within a year after that move, the former church on Talcott Street was demolished after 128 years of service. Just five years after the church moved to its new home, a three-alarm fire began during a choir rehearsal and caused extensive damage in January 1959. Ministers and community leaders quickly rallied to raise funds to restore the church and on Easter Sunday the following year, the church celebrated a beautifully restored sanctuary. Unfortunately, Rev. Wright died less than a month before the re-dedication. The Church retains many of his important papers and books.

In 2009, the church celebrated its 190th anniversary with the theme “Remembering Our Past, Embracing Our Future.” Faith Church – no matter what the name – is still the same people with the same purpose.

In 2019, Faith Church celebrated its 200th Anniversary.  God is still speaking as we move forward in faith.