Improving the health of African Americans in the USA: an overdue opportunity for social justice

In 1928, Louis Israel Dublin wrote “An improvement in Negro health, to the point where it would compare favorably with that of the white race, would at one stroke wipe out many disabilities from which the race suffers, improve its economic status and stimulate its native abilities as would no other single improvement. These are the social implications of the facts of Negro Health” [1]. This compelling assertion remains valid to date. The fact that the African American population is the least healthy ethnic group in the USA is not due to chance. The first African Americans were brought to the USA in chains as slaves. The transport itself from Africa to the New World remains one of the best examples of the ability of one sector of humanity to destroy the health of another. Estimates of the death rate of slaves during the infamous “middle passage” are wide ranging, from approximately 9 to 35 %. Slavery associated deaths were likely much higher [2, 3]

Thirty years after the (1985) Heckler Report was released, African Americans still endure unacceptable health disparities and lack the power over policy and actions that could make the changes to eliminate such disparities. 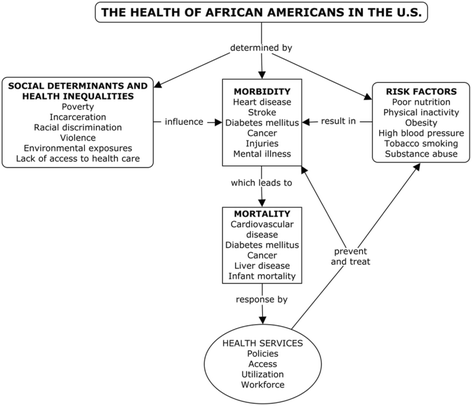