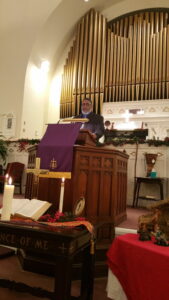 […] As a people of faith and as a people of color in particular we have always stood together to fight oppression, and the common wrong.

The old testament and the Gospel all teach us that all the prophets brought liberation and freedom. We know the struggle of Moses and how he took on the undefeatable pharaoh, we know how David defeated Goliath, we know how Joseph overcame the prison, and all the oppression of the land even the oppression that came from his own brothers.

These are the same challenges we face today. We think the giants in our society can’t be defeated, although we call them the 1 percent and wall street, yet we sing “and the wall came tumbling down”. We think modern day Egypt is too big and powerful to be made righteous. We accept wrong and sins throughout our communities even when we know it’s wrong. We know stores selling pornography, cities promoting prostitution liquor stores on every block of our community, and the legalization of drugs is wrong but we think we can’t take on modern day Egypt  and say no to sin. For many of our people unlike joseph we let the prison the industrial prison complex take control of our lives and our future. And like Joseph we have to be careful not to allow ourselves to be our greatest enemy. It is also unfortunate that Joseph’s biggest enemy was his own brothers, and we find too that often our biggest enemies are those closest to us.

In the Qur’an we also see how we stood against oppression, especially people of color. The first person to die for the establishment of Islam was a black women named Samiya. She took a spear through her heart because she would not denounce the one God of Abraham and Muhammad. She was the first martyr in Islam because she refused to believe in the 365 gods believed in during this time period. When the Muslims were trying to escape persecution from the idol worshippers of Mecca it was the prophet Muhammad’s decision to send his people to the Ethiopian Christian King Negus because he believed the Muslim and the Christians stood on the same principles. When the Meccans tried to take back the Muslims from Ethiopia the Cristian king listened to the arguments of the Meccans and the Muslims. The Muslims spoke from the Qur’an about the birth of Christ Jesus. Tears came to the eyes of the king and he said the difference between you and I are as small as the line he drew on the ground. The Ethiopian Christian King protected the Muslim Community, He said not for a mountain of gold would I return them to you. So the original establishment of Islam was supported and protected by the African Christians.

[…] People of faith was in the forefront. Martin Luther King for the Christians and Malcolm X for the Muslims. Although there were differences in the approach the goals were the same. People of faith forced America to look at themselves and to change the laws of the land. […] At the same time, we see Islam now being persecuted the same way Christianity was misinterpreted in the past. The problems were not with Christianity the problem was with people. We cannot blame Christianity for Slavery, Jim Crowism, The KKK, Hitler, and South Africa, just as we cannot blame the Qur’an, Islam or the prophet for terrorism.