The city’s first bike-share program is up and running – riding – with residents at crosswalks and bus stops gawking as LimeBike employees installed the bright green bikes at locations across Hartford.

LimeBike, the brainchild of CEO Toby Sun and a prominent Silicon Valley firm, provides affordable, dockless pedal bikes to cities and college campuses across the United States. Hartford will be the startup’s first location in Connecticut, and the program comes at no cost to the city.

Where are the bikes?
Hartford’s new fleet of 300 bikes initially will be placed at hot spots designated by the company. Rows of five to six bikes have been set up at locations such as Statehouse Square and the Bushnell Plaza sculpture garden. The bikes are locked and ready for use with just the scan of a QR code. The technology is powered by a solar panel on each bike.

“Normally we give out whatever a family wants,” said Bill Quarles, a deacon of the First Trinity Missionary Baptist Church. “But now we may have to limit that until more supplies come in.”
Read more here.

Denise Fillion, School Crossing Guard Supervisor for the Hartford Police Department (HPD) Traffic Division, sent a letter to the Milner School office dated August 22, 2017, informing the school that two crossing guard posts associated with the school would be closing. Fillion cited “low number of students” as the reason for closing the posts at the intersections of Albany Avenue and Vine Street, and Mather and Garden streets.

Adriena Baldwin, the mother of two students at Milner and secretary of its Parent Teacher Organization (PTO), thought that removing the crossing guards was a recipe for disaster and tragedy. Ms. Baldwin, the PTO, and AJ Johnson, Organizer for the Christian Activities Council, sprang into action by conducting their own survey.

The group monitored the intersection at Mather and Garden streets for two days. On November 13, forty-six children crossed, and on November 17, thirty-three children crossed. The parents were troubled to witness children, in the absence of a crossing guard, haphazardly crossing the street as cars ignored speed limits and traffic signals. Armed with their own action research, the PTO and AJ met with Ms. Fillion and Traffic Commander, Lieutenant Laureano. Unfortunately, the request was again denied due to the “stricter criteria” used by the traffic division to count the number of children crossing.

Tragedy did strike on January 16, 2018, when a speeding car hit Tina Fontanez and Catalina Melendez near 95 Vine Street, just steps away from Milner. Both women died. Although no children were injured, the two deaths alerted police to dangers flagged months prior by the organized parents. Police set up direct patrols on Vine Street the weeks following the accident that resulted in them issuing 25 citations for driving violations and making four DUI arrests. Subsequently, the HPD Traffic Division is restoring crossing guards to the sites requested thanks in large part to the power of organized parents.

With Hartford Public School Superintendent’s approved plan that includes relocating and restructuring Milner, the PTO is gearing up to launch a new safety campaign. Milner students in PK-5 will be relocated to Wish or SAND. Under the current policy, the new schools are close enough to the Milner neighborhood to render students ineligible for school bus service. However, parents are concerned about the safety of their young children having to walk long distances through neighborhoods that are unfortunately still plagued with criminal behavior. The PTO has already alerted HPS to the potential dangers, hopefully, HPS will listen to the parents on what’s best for their children and take action before tragedy strikes.  (from the Christian Activities Council)

A return to debtors’ prisons: Jeff Sessions’ war on the poor

One day after President Donald Trump invited Republican lawmakers to the White House to celebrate the historic tax cuts they passed for corporations and wealthy business leaders, his attorney general, Jeff Sessions, quietly reinstated a draconian policy that effectively serves as a regressive tax on America’s poorest people.  The Supreme Court has affirmed the unconstitutionality of jailing those too poor to pay debts on three different occasions in the last century, finding that the 14th Amendment prohibits incarceration for non-payment of exorbitant court-imposed fines or fees without an assessment of a person’s ability to pay and alternatives for those who cannot. “Punishing a person for his poverty” is illegal, the Court said. Yet in recent years the modern-day equivalent of debtors’ prisons have returned, as cities have grown to rely on a punishing regime of fines and fees imposed on their own residents as a major stream of revenue.  Read more here and here and here.

More to Think About: Community 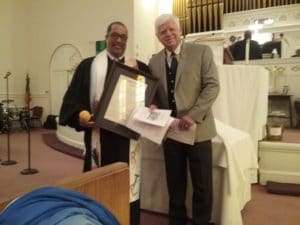 Rep. John Larson came to Faith Church for many reasons. Rep. Larson has visited numerous times, bringing information and keeping us informed. On this visit, he did two important things: he presented a copy of a proclamation in conjunction with having Rev. Camp’s words read into the Congressional Record, and he made a contribution of $1000 to be used for mission through Faith Church. 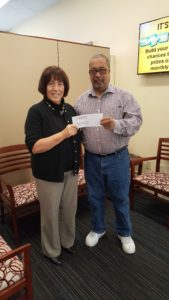 Faith Church raised approximately $1500 for hurricane relief in Puerto Rico. We sent the money through CENCAP Federal Credit Union, a neighborhood financial institution.  CENCAP is one of the few neighborhood financial institutions on Hartford’s North End.  The branch nearest Faith is in a building formerly occupied by Bank of America. CENCAP matched the dollars we sent and forwarded them to relief efforts on the island.  Wendy, the manager of the Terry Square branch, is accepting the check from Faith Church.

Connecticut’s network of regional magnet schools, long hailed as a national model for voluntary integration, still serve only a fraction of Hartford students a generation after their racial isolation was deemed unconstitutional. And those magnets, slipping in their effort to meet racial quotas after the 1996 Sheff v. O’Neill ruling, are now quietly tilting admission preferences to favor white suburbanites, even as thousands of black and Latino students are left out.

That leaves two public-school options for families desperate for a way out: Open Choice, a $35 million-a-year Sheff program that buses Hartford students to predominantly white suburban schools, and taxpayer-funded charters that are the most segregated schools in the state.

Neither option meets the ideals of integrated education, where robust numbers of blacks, whites and Latinos learn side-by-side. But in a world of imperfect solutions, Hartford families are flocking to choices where integration is absent — or actively spurned.  Read more here.

WHEN POVERTY PERMEATES THE CLASSROOM

Struggling to cope with past sexual abuse and a mother who works long hours at a low-wage job, Alex regularly breaks down while at school.

The screaming, crawling and crying of this 5-year-old at North Windham Elementary School – and the arrival of an ambulance when he sometimes begins to hurt himself – are disruptions that make it hard to keep other students focused.

“It’s a continued struggle to survive emotionally,” said Catina Cabán-Owen, the only social worker at her school of 466 students. “This child does not have the support, because the mother cannot provide it.”

Alex, whose name has been changed to protect his privacy, is watched by a neighbor while his mother works. His father is not around.

A student walks by one of the many boarded up houses in an impoverished neighborhood in Hartford on the way to school.

While Alex’s struggle is extreme, his basic story – a student living in poverty who needs help coping with trauma – is common. He is among many students for whom poverty creates or exacerbates obstacles to learning. Read more here.